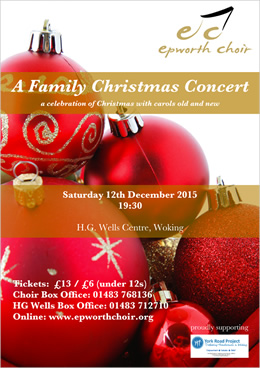 This year’s Concert, conducted by the choir’s Music Director, Michael Waldron, included the usual mix of carols old and new and there was plenty of opportunity for everyone to celebrate the festive season with the ever-popular audience carols.  Laurence Williams, baritone sand a solo and two young brass players, Adam Stockbridge and Sam Kinrade also joined us.

We were delighted to support the York Road Project at this concert and are very pleased that Andrew Hall, the well-known actor and director  represented the charity at the event.

The much-anticipated annual carol concert was, as usual, a joyous occasion of seasonal music that perfectly captured the true spirit of the festive season. 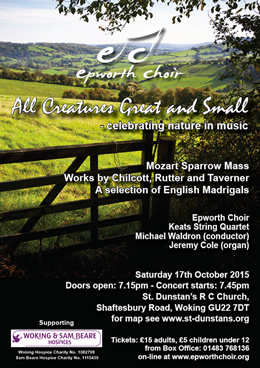 All Creatures Great and Small

On Saturday 18 October 2015, Woking’s Epworth Choir gave a concert at St Dunstan’s RC Church in Woking. The music was based on the theme All Creatures Great and Small – a celebration of nature in music. The choice of repertoire was varied and entertaining and was very enjoyable both for the audience and the performers.

The choir began with a selection of Old English Madrigals telling of animals and birds in stories and song. The choir members sang with beautiful tone and excellent diction and the audience were very appreciative.

The concert was conducted by the choir’s Music Director, Michael Waldron, and featured the soloists Augusta Hebbert, Jessica Dandy, Stephen Mills and Laurence Williams. They each sang individual solos which were warmly applauded. All four singers are young, very talented and the audience really enjoyed their performances.

They also sang the solo roles in the choir’s main work in the second half – Mozart’s Missa Brevis in C (“Sparrow Mass:), KV 220. This particular mass is not often sung in concerts and many of the audience members commented how much they enjoyed hearing it.

The choir also sang a variety of pieces by modern composers (Bob Chilcott, John Rutter and John Tavener) and the beautiful singing of all choir members showed off their ability to embrace a wide range of repertoire.

Our visiting instrumentalists were also young and very talented. We were delighted to welcome back organist Jeremy Cole who played JS Bach’s Pastorale F Major BMV 590 and once again impressed the audience with his skill. The Keats Quartet joined us for the first time and gave a beautiful rendition of Joseph Haydn’s String Quartet in D Major (“The Lark”).

Jeremy and the Keats Quartet also accompanied the choir for some of the pieces and we all enjoyed performing together.

The concert supported the vital work of the Woking and Sam Beare Hospices and a retiring collection raised over £365 for the Charity. 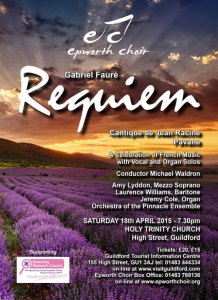 The memorable performance of Gabriel Fauré’s enduring Requiem by the choir and orchestra was enhanced by the glorious singing of Gemma Summerfield, who stood in for Amy Lyddon at very short notice. The audience also very much appreciated Laurence Williams’ interpretation of three songs by Maurice Ravel and the Duruflé/Vierne organ solos performed in virtuoso style by Jeremy Cole. The choir’s performance of Cantique de Jean Racine and Pavanne completed a most enjoyable evening in celebration of French music.